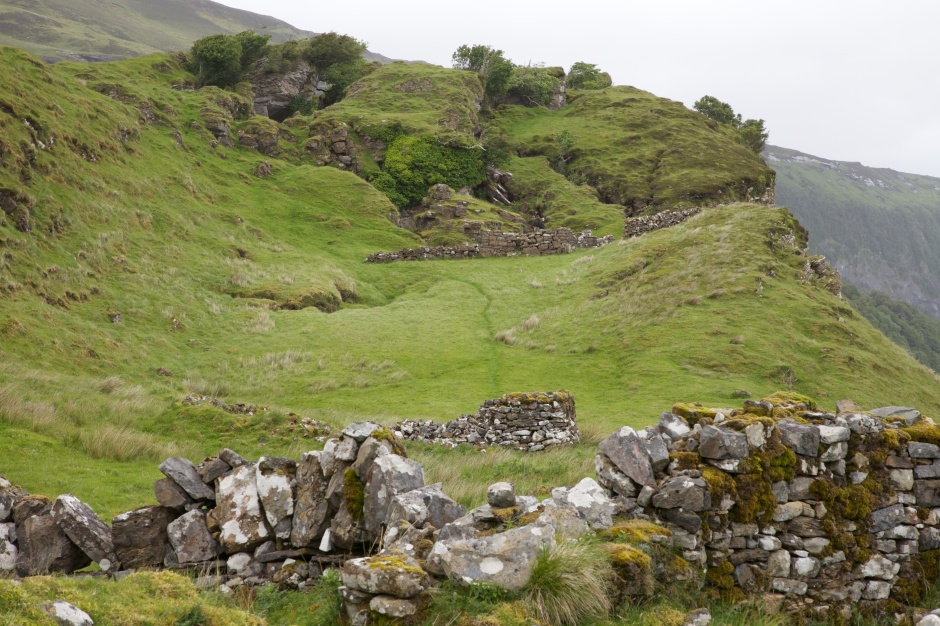 Hallaig is a deserted township on the coast of Raasay. It is immortalised in a famous poem by the Gaelic poet Sorley MacLean which is transcribed below.

(translated from Gaelic by Seamus Heaney)

Time, the deer, is in Hallaig Wood

There’s a board nailed across the window
I looked through to see the west
And my love is a birch forever
By Hallaig Stream, at her tryst

Between Inver and Milk Hollow,
somewhere around Baile-chuirn,
A flickering birch, a hazel,
A trim, straight sapling rowan.

In Screapadal, where my people
Hail from, the seed and breed
Of Hector Mor and Norman
By the banks of the stream are a wood.

To-night the pine-cocks crowing
On Cnoc an Ra, there above,
And the trees standing tall in moonlight –
They are not the wood I love.

I will wait for the birches to move,
The wood to come up past the cairn
Until it has veiled the mountain
Down from Beinn na Lice in shade.

If it doesn’t, I’ll go to Hallaig,
To the sabbath of the dead,
Down to where each departed
Generation has gathered.

Hallaig is where they survive,
All the MacLeans and MacLeads
Who were there in the time of Mac Gille Chaluim:
The dead have been seen alive,

The men at their length on the grass
At the gable of every house,
The girls a wood of birch trees
Standing tall, with their heads bowed.

And coming boack from Clachan
And Suisnish, their land of the living,
Still lightsome and unheartbroken,
Their stories only beginning.

From Fearns Burn to the raised beach
Showing clear in the shrouded hills
There are only girls congregating,
Endlessly walking along

Back through the gloaming to Hallaig
Through the vivid speechless air,
Pouring down the steep slopes,
Their laughter misting my ear

And their beauty a glaze on my heart.
Then as the kyles go dim
And the sun sets behind Dun Cana
Love’s loaded gun will take aim.

It will bring down the lightheaded deer
As he sniffs the grass round the wallsteads
And his eye will freeze: while I live,
His blood won’t be traced in the woods.