I had been in some doubt as to whether to see the current exhibition of work by Laura Knight (until 13 October) at the National Portrait Gallery. She is little known these days and I was not sure whether it would be of much interest. I was wrong; it is a first class exhibition which is well worth a visit if you have time in final few weeks of the exhibition.

Laura Knight was born in 1877 to a family of limited means in Nottingham. She became one of the best known artists in the country, becoming a member of the Royal Academy in 1936, the first woman to be elected as a member since 1768. Her paintings are almost exclusively figurative or portraiture driven by the simplest and strongest of artistic motivations “her fascination with diverse characters and her desire to tell their stories and share her experiences of them” (in the words of Rosie Broadley in her introduction to the catalogue).

Telling stories is exactly what Knight’s pictures are all about; and mostly stories about ordinary people. Fashionable commissioned portraits were clearly offered to her but she took them in small numbers and they represent a small part of her work. This is one clue amongst many that Knight was socially progressive in her outlook; but she was no modernist. This kept very clearly to a realist figurative painting style right through her life until her death in 1970.

One of her first major works, pictured above, the Self-Portrait of 1913 was challenging as a female artist including a nude figure of her friend and fellow artist Ella Naper. Painted at a time when female students were still unable to attend life classes it caused controversy then and later, The Times continuing to refer to it as regrettable as late as 1939. It is stunningly good and quite complex picture which opens the exhibition and sets the tone for everything else which follows. 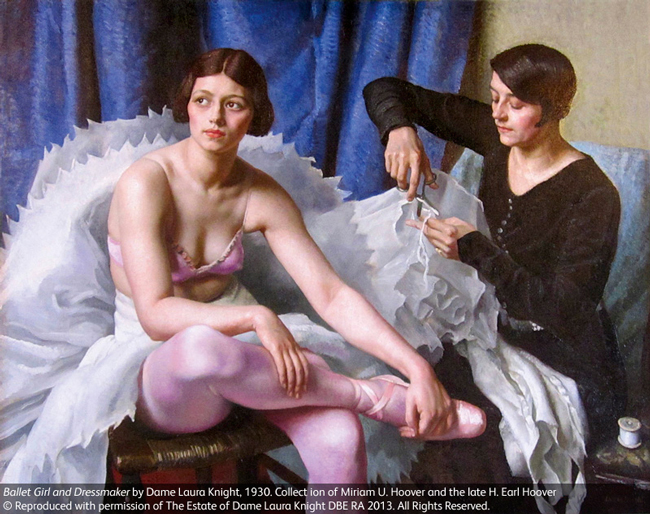 Knight was brought up in Nottingham, went to art school there and married another graduate, Harold Knight. They moved to Cornwall for a few years before moving back to London as their career’s took off. In London, Knight started to focus a lot of her artistic attention on people at the margins; gypsies, ballet dancers and clowns and some of the best work in the exhibition are her informal backstage pictures of these people. The picture above is one of the best examples.

During World War II she was of course commissioned as a war artist and by private companies wishing to advertise their war efforts. In these paintings she continues her focus on giving dignity to those doing mundane work. The pictures are intensely human, real and approachable. They do not require intellectual gymnastics from the reader but they do stimulate and require a strong sense of humanity.

After the war, she lobbied hard and successfully to be sent to Nuremburg to record the trial. She spent three months there observing the daily grind of the trial but was also much affected by the war-time destruction of Nuremburg. Indeed, this sense of destruction was so strong that she felt it had to be part of the picture and the resulting work, The Nuremburg Trial, is unique in the works on exhibition in breaking away from a strictly realist pictorial model as the courtroom seems to extend into the burning city itself. The resulting picture was exhibited at the Royal Academy but coolly received perhaps because critics and the public were not then ready for an image which made German suffering so explicit.

Knight continued to be active until late in life but was rather discarded as a fashionable painter by the rise of modernism. Sir Kenneth Clarke commented one article she wrote in 1942 that “Like her painting, it has the courage of her own commonplaces” and that snide and unworthy remark perhaps indicates that Knight was just too grounded in herself and her style to be considered intellectually interesting or challenging. Clearly she saw no need to explore modernism or abstraction and as the centre of gravity of the British art establishment moved so fundamentally in that direction it is no wonder that she was increasingly perceived as ‘commonplace’. Given that the same art establishment is still in place, and that the same obsession with fashionable newness still dominates so much of the London art world, we must be grateful that the NPG have staged this exhibition. It makes you wonder what other treasures have been over-looked by a generation of collectors and curators who have been seduced by the shock of the new.