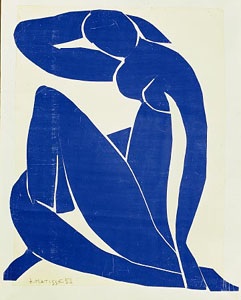 The current exhibition of Matisse’s Cut Outs is one of the “must see” exhibitions in London this summer. The exhibition is crowded, the surrounding marketing extensive and, judging by the range of posters and prints on sale, every bedroom in London must by now be decorated with a cut out. The critical acclaim has also been universal; I can’t remember a review which was less than adulatory. So it is with some fear that I venture a somewhat contrarian opinion.

Henry Matisse (1869-1954) is undoubtedly one of the defining influences of C20 art, ranking alongside Picasso and remaining highly creative and energetic right to the end of his life. The nature of his work changed significantly in his later years after he came close to dying. He had for some time used cut out images as part of the creative process, experimenting, for example, with alternative compositional arrangements before finalising a painting. But in his later years, in part because of reduced mobility, he progressively abandoned painting and sculpture in favour of creating art works from cut outs of paper painted by his assistants in a carefully selected but limited range of primary colours.

With this method, Matisse developed a prolific range of late works in various sizes from book illustrations to what were essentially complete wall coverings; wallpaper developed in situ. The Tate have assembled the largest exhibition there has been of these cut outs which fills a large part of their available exhibition space. It is a giant exhibition of some giant works.

As I viewed the exhibition I was struck time and again by the similarities between this show and the show in 201X at the Royal Academy of works by David Hockney (see here for my commentary on that exhibition). Both shows were committed to exploring a relatively limited subset of the artists total oeuvre. Both showed work which at its best was sublime we, joyful and life affirming. But both seemed to be focused on showing everything they could obtain, at the expense of any critical selectivity. And in both cases the artists seem to have become obsessed by scale and creating works which are much bigger than their content justifies; bigger is not necessarily better, it can become just decorating.

This is not to say the exhibition is to be avoided. There are some wonderful things. My favourite room, by far, was the room of blue nudes supported by four small bronze nude maquettes from earlier in his career. The nudes remind us how few lines are required in the hands of a master to bring a block of colour to life. They are elegant, sensuous and bursting with life. That they were constructed by cutting rather than drawing the lines is interesting, but I felt immaterial to the end result. And whilst some were produced quickly with a few cuts of the scissors, the first reveals a much more tortured process of shaping and re shaping the outlines of the image. It is perhaps best thought of as two dimensional sculpture.

Early in the exhibition there is also much to enjoy in the original cut outs for the book printed as Jazz, as well as a copy of the book itself. It was interesting to go back to this having been to the end and realise that in the earlier work there was a great variety of images and colours, exploring how they juxtaposed one with the other. As his work developed on from that, his range of standard shapes and motifs reduced, as did his palette of colours. To my mind that is a matter if regret, perhaps enforcing a sense of repetitiveness in the later rooms.

So all in all, this is an interesting exhibition of works from a man who is undoubtedly one of the grand masters of C20 art. But like the Hockney show I mentioned above, and it lacks selectivity is perhaps too big a show for the work it is showing. You could feel that it is the product of the curator as uncritical fan, rather than careful and critical selector of what is truly important.